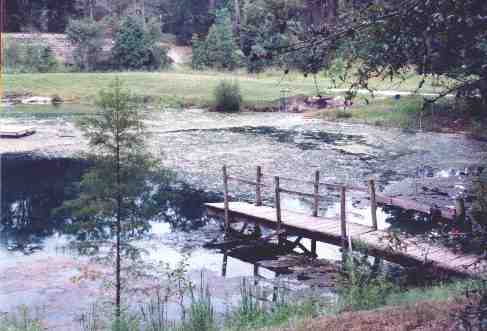 Description:
Indian has a large cavern that funnels into a cave. In November of 1991, the spring suddenly reversed flow. This caused the cave entrance to plug up with sand, trapping a team of divers. The Aquacorp archives (here) has a detailed incident report by team member Bill Gavin.  To date, Parker's death is the only known fatality to occur that was not a direct result of diver error. Until his death, he was the director of the WKPP. Later, George Irvine would take up the position and restructure the team. He holds several world records including furthest penetration from any air supply (19,000 feet Wakulla Springs) as well as longest traverse between two entrances (Leon Sinks system). The property to closed except to permitted groups and only during non-summer months. The WKPP continues to do numerous explorations here in their attempts to connect other area systems (such as Sally Ward and Wakulla Springs). There are several videos in Real Player formatof the cave on Herve Deschamps's site here. Steve Auer has a good picture of one of the rooms in Indian Springs here.