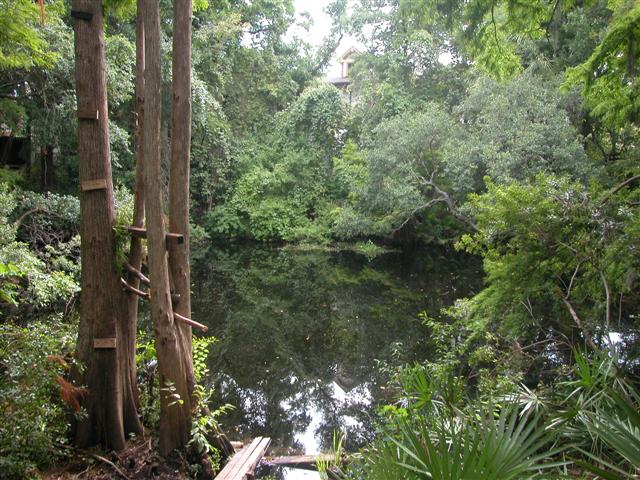 Location:
Round Sink is located in the Beacon Woods subdivision in Hudson (near the corner of Hwy 19 and Hwy 52). From Hwy 52, turn onto Majestic Blvd (Walgreen's on corner). Turn right onto Clock Tower Parkway and then an immediate right onto Magnolia Grove Ln. The old parking spot used to be on the cul-de-sac, however the area has now been posted. Another example of people fearing what they don't understand and supposed liability concerns.

Description:
Round is one of several entrances into Beacon Woods cave system with others including Nexxus Sink and several unnamed windows on the Beacon Woods golf course. Round Sink is located near the end of a cul-de-sac next to a large pond. The sink is just inside the woods and can only be reached by foot with the path starting near the pond. There are several trees with eye hooks from which to hang bottles. The Beacon Woods system has an average depth of 140-150 feet which makes this an advanced dive due to trimix requirements. Steve Straatsma and Brett Hemphill have doing some independent surveys of the system whenever it clears. From Round, there are two main lines. The place was said to be a spider's web at one time until the first line got buried in several places after the floods of 1998. There is a new guideline running alongside the old line for now in several places.

This dive site, as well as all the others in the area, has now been posted by the Beacon Woods Civic Association with several signs erected near the old parking area as well as the path to the water. Nexxus is similarly blocked off with even a fence surrounding the sink itself. The only gate is behind the Civic Association buildings.